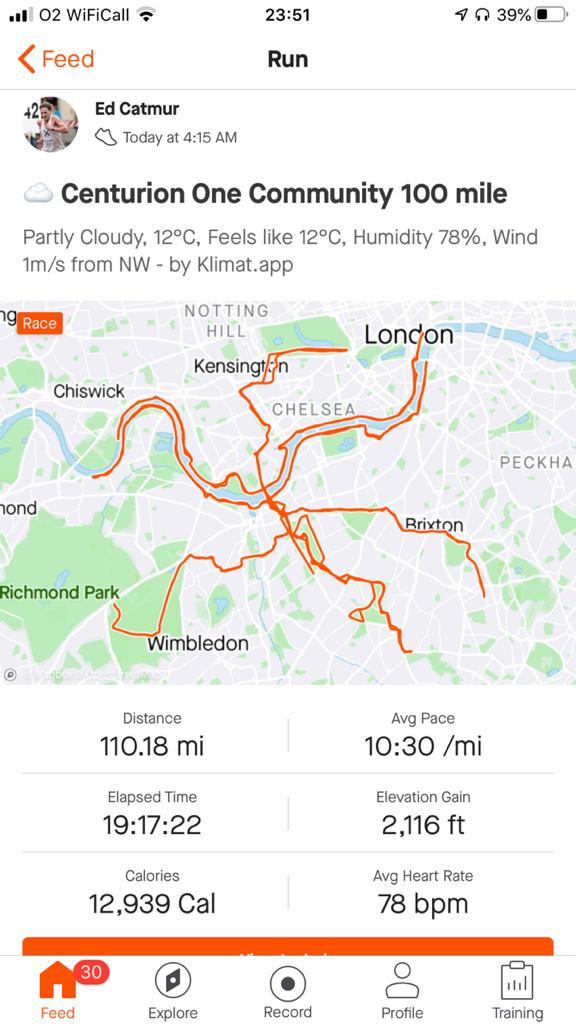 While most people were out in the park or common (socially distanced) on Bank Holiday Monday, Ed was running 100 miles. He says:

The 100 mile race I usually run in May, from London to Oxford, was cancelled so when the organizers (Centurion Running) put on a virtual 100 mile as a replacement I knew I had to take part. The window for running lasted from midnight on Monday through the whole of the following week, but I wanted to get it done as soon as possible so I set my alarm for 4am to make the most of the daylight. The first leg, upriver past the Putney boathouses in the predawn light, was magical apart from hitting tidewater outside the Stag Brewery in Mortlake, but by then my watch was telling me it was time to turn around – the idea was to run 8 legs of 20km, turning when my GPS told me I’d run 10km from home to refuel. Someone in club chat said my route looks like a starfish, but I think an octopus is more correct when you notice I’ve run both banks of the river in both directions.

As the day heated up I was still making good time – suspiciously good time, in fact. I was feeling a little concerned but it was only on the last leg – where I’d planned the 10km mark to be the door of the TH&H clubhouse – that I discovered my Garmin had been misleading me as it beeped to turn round several hundred metres short; it turned out that the power saving mode invents extra zigzags making it record more distance than you’ve actually run. I arrived back home as the sun was setting and got the laptop out to calculate just how far short I was – it looked like about 10km, so I rounded up to 10 miles to be sure. Those last 16km – through parks with people clearing away their picnics in the growing dusk – were pretty tough knowing how close I was to home, but I made it back before midnight and up in time for the Zoom team meeting at 10am.

Next ultra should be considerably shorter – a 90km virtual race to substitute for the Comrades Marathon in South Africa, with a relatively civilized 5:30am start. Know any good hills near Battersea?