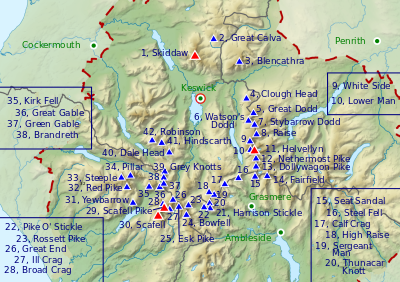 Back in June two brave Thames men, Matt Jones and Ed Catmur attempted one of the classic ultra long distance challenges in the UK.

Matt Jones writes: Ed and I set off at 1am on a warm night from the Moot Hall, clapped on the back by a couple of friends and accompanied by James Hoad, loaded up with our water bottles, sugary snacks, waterproofs and spare jock-straps. Relieved to be off, and perhaps naively on my part, we tackled the first few slopes a little on the pacey side. Apart from a small fog over the crest of Skiddaw, the only cloud-covered top all route, the going was clear even by night. The bog below Hare Crag was shrunken and dried, the Caldew which had been waist deep in April could now be crossed by stepping stones, the long climb up Mungrisdale softened by dawn’s tender light, the feared Hall’s Fell (well I was a bit afraid of it) was thrilling rather than terrifying and we reached the first checkpoint and my father in law at Threlkeld in 3hrs35m, 25 mins ahead of schedule. A note here about Ed’s descending. It is a thing of beauty to behold. If Ginger Rogers could do everything that Fred Astaire did but backwards and in heels, then Ed can outdance Astaire in fell shoes on 45deg rock-strewn slopes.

10 mins later we were off, joined by a new pacer, Scott, to accompany James. Such was our ebullience that Ed was moved to poetry, quoting AE Housman’s A Shropshire Lad at me (“and the ship of sunrise burning, strands upon the eastern rims”) as we crested Clough Head in the dawn sun. Still moving at pace we knocked off the peaks with increasing rapidness. The Dodds, Helvellyn, Nethermost and Dollywagon seemed to go in a blur. Even the sting in the tail, the out and back up Fairfield at 873m, followed immediately by the 736m Seat Sandal seemed relatively benign and we sighted Dunmail Raise and the next food stop with some excitement, reaching Gordon and Lucy Pearce and Andy and Chris Robinson 45 mins up on schedule.

But then at 8 hours in to the attempt things went slightly wrong. My first slug of water came straight back up. My legs turned to jelly and my stomach recoiled at all the sugary snacks and ham sandwiches I had packed. After 15 mins we were off again, shedding James and Scott, but joined by Gordon who did his very best to assuage my increasing waves of nausea with a constant stream of positive patter. Cresting Dunmail I was sick again. Turning to the ultra expert I asked Ed what to do. “keep running” was his terse reply. So I did. It was grim. The sun was in full heat, the weather humid and I was very worried that my time was up. Shortly before Sergeant Man I managed to keep something down, a rice-crispie bar (there’s a plug) and my fortunes started to turn. We arrived at what we thought was the Man to find two men drinking beer having scattered a grandfather’s ashes. Sergeant Man was his favourite mountain. Except Ed noticed this wasn’t Sergeant Man and loudly announced so before heading off towards the correct peak, leaving the two men seemed somewhat crestfallen.

Leg 3 improved but was never great. We staggered up Bowfell, finding a reasonable route through the Hanging Knotts scramble and mysteriously still on schedule. We ran out of water at Esk Pike but Gordon played the hero, dashing off to find a stream whilst Ed and I crested Great End. This time we found the gully up to Foxes Tarn with relative ease and with all five 900m mountains on this leg done we descended to Wasdale with most of our advantage wiped out but still on schedule just about. I was emotional but the support team, including my two children, were having none of it, shooing us off up the Yewbarrow, that grim wall of a 500m climb, when we looked to delay too long. The bottle of coke and 500mg of ibuprofen might also have helped cheer my mood.

Leg 4 underway, joined by a new pacer, my brother Stephen, and all to play for. Somehow we began to gain time again and on the long run down from Pillar to the Blacksail Pass I began to feel we might make it. Andy Robinson – who won the prize for appearing at the most points en route, 6 in all –  met us on Blacksail with a bag full of water and Gordon called it a day, having run 6 hrs longer than he had ever run before. The scramble up Kirkfell was almost fun and the tramp up my favourite mountain, Great Gable, was made without even a moment’s pause to catch breath. We tumbled into Honister ahead of schedule. With more than 4 hours spare to complete the round there were smiles and hugs all round. We were sure we could do it.

Jess Davies joined to pace and Stephen vowed to keep going. Three peaks later, as the sun set over Robinson’s, our 42nd peak, we were still fleet of foot, although I was clearly beginning to hallucinate just a little. The farmer herding sheep at the peak turned out to be just another sheep and various paths and sheep I spotted thereafter turned out not to exist. I didn’t dare tell the pacers what else I could see. We galloped into Newlands, all 42 peaks behind us as full darkness fell and Anna and Andy R met us with fresh trainers. Ed, the mighty hero of the fells, the tango-dancer of the descents suddenly took a deep turn for the worse and it was our turn to encourage. Nevertheless, we pushed on through, jogging the 5 miles to Keswick, turning into the central market place as the pubs were spilling out at closing time. Our own crowd of 14 cheering supporters were joined in full throat by 30-40 drunken men from Newcastle, some in fancy dress, to whoop and whistle us home and Ed and I stopped the clock at 22hrs 43m, beating the hallowed 24hr mark and our own target of 23 hrs. Someone thrust a beer into my hand and after photos and more hugs – a real trial for some, Ed and I both reeked, as Jess D candidly told us – we duly cheered off 3 more attempting groups into the night.

What a day. A triumph as much for all the support crew as it was for us, without every one of whom this would have been impossible. Thank you.”